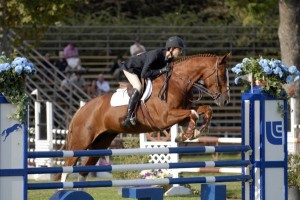 Sixteen-year-old Theo Boris of Culver City, CA, began training with Karen Healey just three months ago, and he has come a long way since the start of the summer. At the Blenheim Fall Tournament, Boris earned a second place finish in the ASPCA Maclay Regionals and a first place victory in the WIHS Equitation Classic riding his eight-year-old Dutch Warmblood Du Calme (by Voltaire). Boris then went on to earn the championship in the 2009 Platinum Performance/USEF Talent Search Finals – Westriding Carol Bird’s W.C. Swing, who also won last year’s finals with Karen Healey student Hannah Selleck. Boris earned his second championship of the week in the USEF Pessoa Hunt Seat Medal Zone 8, 9, and 10 Finals again riding his horse Du Calme.

Theo Boris has been riding since around the age of five and decided to start training with Karen Healey this year in order to get a fresh perspective. “I think that everybody at some point needs to change, and I just felt like it was the right time,” Boris stated. “Really there was nobody else that I considered going to; I just really wanted to ride with Karen. I have always watched the way she teaches and I really liked her.”

“What she does isn’t magic, it is just proper training,” Boris said. “She makes sure that you are really prepared, so that when you get to the ring there are no surprises.”

Boris explained that Healey has brought a lot of confidence to his riding that he did not feel before. “I think that I did really well because I am a lot more positive about things now,” he acknowledged. “At the beginning of the week I just told myself, ‘My horse feels really good, I feel ready, and I am going to do well.’ I should have been that way a long time ago, but riding with Karen gives me so much confidence and I think that really brings a positive feeling to the whole experience.”

In addition to improving his confidence, Boris noted that Healey has also had a very positive effect on his equitation horse, Du Calme. “Du Calme just turned eight, so he is relatively young still. I have owned him for a year, and in the past three months that I have had him with Karen, he has become a completely different horse. He is so rideable, so adjustable, and he is really, really brave, which has given me a lot of confidence with him. He is a really good horse with a good mind and he is a very sweet, funny character.”

Boris has a busy fall schedule ahead as he prepares to travel to the East Coast for indoors. He will compete at the Capital Challenge Horse Show, in Upper Marlboro, MD, followed by the PA National Horse Show in Harrisburg, PA, and the Syracuse Invitational Sporthorse Tournament and 126th National Horse Show in Syracuse, NY. Competing against some of the top horses and riders in the country, Boris will show in the prestigious USEF Pessoa Hunt Seat Medal Finals and ASPCA Maclay National Championship, and will then return to California to compete in other West Coast medal finals.

As the 2010 show season nears, Boris hopes to maintain his biggest goal, which is to be consistent. He also hopes to buy a jumper so that he can start showing consistently in the High Junior/Amateur-Owner Jumpers and would like to do more catch riding throughout the season. Boris will again pursue the top honors in the equitation divisions, and hopes to qualify for the Washington International Horse Show next year, as it has eluded him in 2009. The astute young rider noted that he does not like to set his goals too high or too far ahead in the future, but would rather take it day by day according to how he is riding.

Following Boris’s second place in the ASPCA Maclay Regionals at Blenheim was Karen Healey student Jocelyn Neff, who placed third. Healey had several other riders qualify for the Region 8 Finals as well, including Navona Gallegos and Holly Dickinson, along with Samantha Harrison and Demi Stiegler, who both placed in the top ten.

Other top competitors out of Karen Healey Stables at the Blenheim Fall Tournament included Alexandra Block and Kristi Siam. Alexandra Block placed second in the USEF Pessoa Hunt Seat Medal and also received top ribbons in the Large Junior Hunter 16-17 riding her horse All That. Kristi Siam won the USEF Adult Medal and continued a winning year with her horse Krosus by earning the championship tricolor in the Low Amateur-Owner Hunters.

The L.A. International Jumping Festival hosted the USEF Zone 10 Adult Medal Finals as well this weekend, and Karen Healey riders Kristi Siam and Yvette Lang-Einczig both placed in the top ten. Kristi Siam rode her horse Krosus to a fifth place in the finals and also placed second in the regular USEF Adult Equitation during the week. Yvette Lang-Einczig rode Landino to a ninth place finish in the final and also placed first in the Foxfield Medal and Equitation 36-50 over fences.

Mackensie Baker and Tolstoy were top finishers at L.A. International, placing first in the WCE Medal and Equitation 16-17 on the Flat, and placing second overall in the WIHS Equitation Classic. Demi Stiegler placed second in the USEF Pessoa Hunt Seat Medal and was third in the ASPCA Maclay, and Haley Harrison came in fourth place in the CPHA Foundation Medal.

In the jumpers, Karen Healey students continued to excel as Samantha Harrison and Santika came in sixth place in the $5,000 High Junior/Amateur-Owner Jumper Classic.

In addition to the great success at the Blenheim Fall Tournament and L.A. International horse shows, one of Karen Healey’s top students, Hannah Selleck, did very well at the Spruce Meadows Masters. She was fourth in the $75,000 BP Cup 1.50m as well as fourth in the $50,000 Suncor Energy Cup 1.50m class, both with her horse Tosca.

Karen Healey Stables will compete next at the Capital Challenge Horse Show in Upper Marlboro, MD, September 26 – October 4, 2009, and the Flintridge Autumn Classic in La Canada, CA, on September 25-27, 2009.