Despite the fact that trainers aren’t allowed to assist riders when they’re warming up or walking the course for the R.W. “Ronnie” Mutch Equitation Classic, Theodore Boris wasn’t too worried. He felt like he could hear the words of his trainer, Karen Healey, in his head.

“It’s so nice to have Karen as a trainer,” Boris said. “It’s very confidence-building to be with someone who has so much knowledge. Even if she’s 20 miles away, you can still hear her voice.”

Riders must qualify for the classic by winning at least one major equitation class in any of the major winter circuits: HITS Thermal (Calif.), HITS Arizona, HITS Ocala (Fla.), Winter Equestrian Festival (Fla.) or Gulf Coast (Miss.). Only eight riders entered the covered ring in Thermal, Calif., for the Ronnie Mutch Classic. All eight completed the first two courses, and then Boris and second-placed Cassandra Kahle, riding Taylor Harris’ Vindoctro, returned for a test.

The test called for several canter fences, a trot jump, one tight turn and fence to be negotiated in counter-canter, and then two flying changes and a halt on the quarter line in front of all six judges.

Kahle tested first. Her horse wouldn’t pick up the counter-canter, and she did simple changes instead of flying changes, which opened the door for Boris. However, because the riders were told to face the stands, he didn’t know that. Boris’ horse also broke from the counter-canter, and Boris assumed he’d lost. But two perfectly executed flying changes and smooth, bold lines still left him standing in first.

“I messed up that counter-canter,” Boris admitted. “I could have had him around my right leg more, and it just came up really quickly. Things don’t always go as planned. It will give me something to work on!”

Besides being judged in the ring, riders are also judged in the warm-up for the Ronnie Mutch Classic. For each of the first two rounds they are given up to three bonus points or three points taken off their score in the ring for their warm-ups. Boris received three bonus points for each of his warm-ups. He attributed the extra points, and his win, to his theory of keeping it simple. Before the first round he only jumped about five jumps, and then only two before the second round.

“My warm-up was very brief,” Boris said. “Karen told me earlier today, ‘They’re not going to see how many jumps you’re going to jump in warm-up when you’re in the ring.’ I had done a few classes during the day, so I was already pretty much warmed up. He’s a very easy horse to prepare. I know the horse, and I know myself. I like to keep things simple. When I start jumping too much or thinking too much it just starts complicating things.”

Boris said one of the biggest challenges in the class was the size of the covered ring at Thermal.

“It’s a very small indoor ring,” Boris, Los Angeles, Calif., said. “My plans a little bit changed in the first round. You really had only two strides to the first fence, which was a triple bar, and usually you want a lot of room to get to the base of the triple bar. I got a little deep, and I just didn’t have enough to do four strides in the next line, and if I did it would have been ugly. I did the five, and that worked out well.”

Boris hopes to qualify for the fall indoor shows on the East Coast again this year. He also has a newly purchased junior jumper and would like to qualify for the North American Junior And Young Rider Championships (Ky.). Despite his East Coast aspirations, he said that he still enjoys riding on the West Coast because the pressure is slightly less.

“Even if you put this same course in the ring at Harrisburg, it would feel totally different,” he said. “It’s a psychological thing. It’s stressful.” 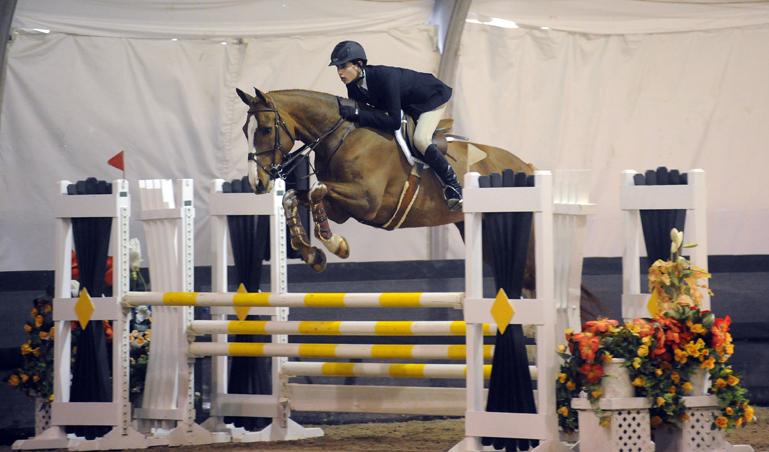 Reprinted with permission from The Chronicle of the Horse.