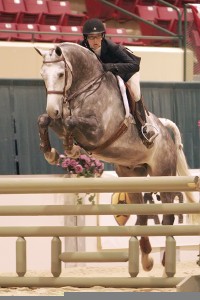 The winner of the West Coast Equitation (WCE) Junior/Amateur Medal Finals was 16-year-old Navona Gallegos of Santa Fe, NM. The young rider and her horse Class Action were steady through three rounds of jumper-style courses to take the win. Second place and the top amateur in the finals was Hannah Selleck of Thousand Oaks, CA. Jocelyn Neff of Newport Beach finished fourth, Demi Stiegler was sixth, and Samantha Harrison placed ninth.

Gallegos noted that there was a tight time allowed in each round, but that her horse is great for the jumper-style courses. She has only been riding Class Action for three months. “He’s been amazing. He was a little backed off for the first round because he’s never been in the Equidome before. Then he was really relaxed the second night and was going forward more,” she described.

This was Gallegos’ best equitation finish in her career and capped off a great 2008, along with her fifth place individually in the junior division at the North American Junior Young Rider Championships. She has been training with Healey for three years and gave credit to her trainer for helping her succeed. “It was really great to win with my horse because he’s still pretty green. He was doing the Pre-Green Hunters before we got him. He went back east for the first time this year and was great. It’s been amazing to see how far he’s come so quickly,” she said. “It’s amazing how she can transform a horse in such a short amount of time. I’ve come a really long way with Karen.”

The Equitation 14 and Under Championship went to Demi Stiegler, who rode Vigo. Stiegler placed second in the first round and fifth in the second round to finish with the top ribbon. Kylee Arbuckle, who also trains with Seahorse finished third.

Jocelyn Neff and her new mount Lord Loxley took the Equitation 15-17 Championship after she placed third and first in the two rounds. Carly Anthony placed second, while Gallegos was sixth. Gallegos also won the ASPCA Maclay class, with Arbuckle in third. Elizabeth Dickinson of Los Angeles piloted The Graduate to first place in the Equitation 36 and Over Championship. Dickinson took first place in the Foxfield Medal class, while Selleck won the USEF Show Jumping Talent Search class.

Samantha Harrison and Santika were close to winning yet another classic in 2008, but finished just off the pace in second place in the $5,000 High Junior/Amateur Jumper Classic. They also placed third overall in the PCHA Junior/Amateur Jumper Championship. Their great success this year netted them the big win in the Show Jumping Hall of Fame Jumper Classic Series Western Conference in the junior jumper division.

Tammy Chipko of Westlake Village, CA, and All That brought home the championship in the Amateur-Owner Over 35 Hunter division. They won two firsts, two seconds, and a third in the division. Navona Gallegos rode Limo in the Large Junior 16-17 Hunters and placed second, third, third, and sixth. Hannah Bibb and Regatton were in the same division and placed first, sixth, and sixth.