At the third week of the HITS Thermal Circuit, Karen Healey Stables dominated the competition. They won 14 equitation classes over the week against the best competition, and they won nine tricolor ribbons spanning the equitation, hunter, and jumper rings. They also won three mid-circuit awards.

In the USEF Show Jumping Talent Search, Karen Healey Stables won four of the top five spots, with Natasha Traurig finishing first, Samantha Harrison second, Hannah Selleck third, and Jocelyn Neff fifth. Harrison took the win in the USEF Medal, while Traurig was third. Neff took the blue ribbon in the ASPCA Maclay class while Navona Gallegos was second and Shelby Wakeman was fourth. Gallegos was second overall in the WIHS Equitation class while Samantha Harrison was third, Wakeman was fourth, and Traurig was fifth.

In the CPHA Foundation class, Selleck took the win while Neff was fifth, and in the CPHA Junior Medal, Carly Anthony was third and Harrison was fourth. Gallegos finished second in the WCE Medal, Selleck was third, and Neff was fifth.

Demi Stiegler was victorious in the PCHA Medal class, and Haley Harrison finished third in the Marshall and Sterling Children’s Medal. Stiegler had another top finish with second place in the THIS Children’s Medal.

Skylar Nelson had a good week in the pony division. She was fourth in the USEF Pony Medal and third in the WIHS Pony Equitation class. She also received top ribbons in the Large Pony Hunters on Dutch Treat.

In her first time showing in the Modified Junior Jumper division, Demi Stiegler and Ce Ce Capone finished as reserve champions. They were second in two classes.

In the Low Junior Jumper division, Jocelyn Neff and Golden Flip were second in a class and fourth in the classic. Navona Gallegos and Punker also had a second place finish and were eighth in the classic. On her second horse Rembrandt VH Paradijs, Gallegos was fifth.

Samantha Harrison and Santika finished second in the High Junior Jumpers, while assistant trainer Kasey Ament and Jipsian were double clear in the Futures division and finished in eighth place.

Another top rider in the Large Junior 16-17 Hunters was Michelle Morris, who received ribbons with Revelation, owned by Hannah Goodson-Cutt and trained by Kate Considine. Samantha Harrison got the ride on The Frog Prince, owned by Ashley Pryde and trained by Archie Cox, on Friday and received two second place ribbons in the Small Junior 15 & Under Hunters.

Showing at the CN Winter Equestrian Festival in Wellington, FL, Tina DiLandri received top ribbons in the highly competitive equitation classes. She finished second in the ASPCA Maclay class, second in the USEF Medal, and third in the USEF Show Jumping Talent Search. A win in the WIHS Jumper Phase gave her second place overall in the class. 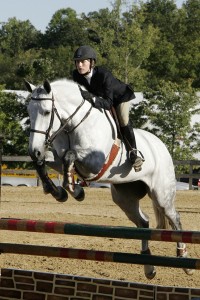 Karen Healey Stables competes next at the fourth week of the HITS Thermal Circuit on February 19-24, 2008.