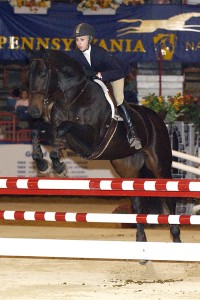 Second place in the R.W. “Ronnie” Mutch Equitation Classic went to Shelby Wakeman of Westlake Village, CA. Wakeman’s mount won Best Equitation Horse and her groom, Luis Cervantes, won the Best Turned Out Horse award. Tina DiLandri of La Jolla, CA, was fourth in the class while Michelle Morris of La Canada, CA, finished fifth on a catch ride. Samantha Harrison of La Canada was eighth and Jocelyn Neff of Newport Beach, CA, was ninth. Hannah Selleck of Thousand Oaks, CA, finished twelfth, but was third after the first round. She could not return to the show for the second round on Sunday due to school commitments.

In addition to her big win in the Ronnie Mutch Equitation Classic, Anthony won the ASPCA Maclay and was second in the USEF Junior Medal and overall WIHS Equitation class.

Neff won her first USET Show Jumping Talent Search class this past week on Allegro, a horse that has just started showing in the equitation classes. In the Talent Search class, Wakeman was second, DiLandri was third, and Harrison was fifth. On her own horse Cavello, Neff also won the USEF Junior Medal and CPHA Junior Medal class. Hannah Bibb took home a second and two fourths in the Equitation 16-17 this week and was fifth in the CPHA Foundation Medal and the CPHA Junior Medal.

Lauren Hester of Rancho Santa Fe, CA, won her first Marshall and Sterling Adult Medal class with her young, up-and-coming equitation horse Denmark. She finished as reserve champion for the week in the Equitation 18-35 division and was second in the Adult Equitation Classic.

In the hunter ring, Tammy Chipko of Westlake Village took home an armful of prizes. This past week, they won all four over fences classes to take the championship in the Amateur-Owner Over 35 Hunters. This helped them win the overall circuit and second half reserve championship in the division after they only showed three weeks in the circuit. They were second in the $5,000 Amateur-Owner Hunter Classic. On her second horse Amnesty, Chipko was second, second, third, and fourth this week in the same division and they were fifth in the classic.

Assistant trainer Kasey Ament piloted Zico 13 for owner Fred Bauer to second and seventh place ribbons in the Level 7 Jumpers. They finished tenth in the $10,000 Futures Jumper class. Michelle Morris and Lichtenstein 7 finished as champions in the Low Junior Jumpers. Carol Bird and WC Swing were fourth in the $5,000 Modified Junior/Amateur-Owner Jumpers, while Alexandra Block and Kool Shoes finished third in the $5,000 Children’s Jumper Classic.