After settling in to a beautiful new facility mid-year Karen Healey Stables finished 2012 with tremendous results as well as special achievements, and welcomed some great new horses and riders. Thrilled with the growth and resilience of her program, Karen is ready to forge ahead for another season.

Recounting the success of 2012, one of the biggest moments was when Kilian McGrath won individual gold, team bronze and the special Style of Riding Award with her mount Salerno at this year’s Adequan/FEI North American Junior Young Rider Championships (NAJYRC). McGrath also won the 17-Year-Old Equitation Championship at the Capital Challenge Horse Show and was reserve champion in the CPHA Junior Medal Finals. She was Year-End Junior Jumper Champion for the PCHA, Zone 10 and the West Coast Show Jumping Hall of Fame and won the CPHA Junior Achievement Award. 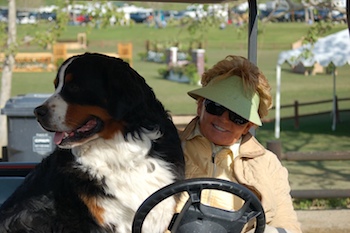 Karen Healey remarked, “It was a heck of a year. We went through some regrouping with moving to the new barn. We had ups and downs, but the highs were very high. Kilian ended up having an amazing year and Young Riders was really special, as was USEF Talent Search Finals. She ended up being Zone 10 Equestrian of the Year and received a special achievement award from the CPHA. We also got some new clients that are very nice and enthusiastic, and I am looking forward to going on with them. I think even with the downs that happened, all were able to bounce back, continue to keep their focus and do well. Resilience – I learned a lot about that this year.”

Olivia Champ, riding Parrandero, also won the CPHA Foundation Equitation Championships, 14 & under. After riding with Healey for the past year, now fifteen-year-old Champ spoke about Healey’s training and the difference it has made in her riding.

“I would say the highlight of my year was the Talent Search Finals,” Champ noted. “Karen was absolutely amazing there because she really knows how to work a horse on the flat, which is so important in that final. She really got the most out of me and helped me with the switching of the horses in the top four.”

“Karen is very upfront and straightforward,” Champ said of Healey’s program. “She is so big on correct and straight riding. She focuses on making the horse go their best and for me to ride the horse not only well but correctly. She is definitely one of the best on the west coast and you can see it through how relaxed and together all of her riders are.”

Hannah Heidegger and Beckham, co-trained by Will Simpson, earned many top results throughout the year. Heidegger was champion in the CPHA Junior Medal Finals, USEF Regional Finals and the 14-Year-Old Equitation Championship at the Capital Challenge Horse Show. She was also reserve champion in the ASCPA Maclay Zone 8 Regionals and PCHA Horsemanship Finals, and finished in the top ten of the Pessoa/USEF Hunt Seat Medal Finals.

In other results, Lauren Kay and Siendifie won the PCHA Junior/Amateur-Owner Jumper Championship, Savannah Jenkins was reserve champion in the 17-Year-Old Equitation Championship at Capital Challenge, and Emily McLean, with the help of co-trainer Devon Gibson, earned the reserve championship in the CPHA Foundation Medal Finals, 14 & under.

Haley Harrison also had a very special moment this year when she was presented with the CPHA Sportsmanship Award.

Moving to beautiful Whitethorne Ranch in May was a big change. Thinking back on the move, Healey detailed, “Melissa (Jones) and Tasha (Visokay) took care of all the details, so it was great. There are always a few growing pains when you go into a new place and people get settled in. I was away quite a bit with EAP clinics and judging, but I got a feel for the place when I got home from indoors. Having a grass field to school on is a big plus. That for sure helped the riders prepare for Talent Search Finals.”

Along with the great success of the year, Karen Healey Stables would like to welcome some new riders to their team, including Morgan Dickerson, Savannah Dukes, and Makenzie and Shelby Drazan.

Already kicking off the 2013 season with a bang, Karen was proud to have three representatives from her barn invited to Florida, Samantha Harrison, Olivia Champ and Kilian McGrath, to participate in the George H. Morris Horsemastership Training Session in early January.

Karen Healey and Descanso Farm also congratulate Hannah Selleck on all of her success and wish her the best at the FTI Consulting Winter Equestrian Festival circuit and beyond.

The 2013 show season for Karen Healey Stables will kick off at the HITS Desert Circuit in Thermal, CA.

Equ Lifestyle: How The West Has Won
An Amazing Desert Circuit 2013