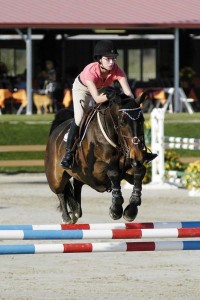 Karen Healey Stables had a successful winter show season with multiple wins and top placings throughout the HITS Thermal Desert Circuit’s eight weeks of competition. The horses and riders out of Karen Healey Stables showed from February 23 through March 22 in Thermal, CA, and were at the top of the circuit’s championship standings after the show’s conclusion.

Kasey Ament rode Alexandra Block’s horse Walk the Line throughout the Thermal Circuit’s eight weeks of competition. The pair placed consistently well each week and was overall circuit reserve champion of the Adequan Hunter division at the show’s conclusion. Ament and Walk the Line were champion of the Adequan Hunter division during week four and received top placings throughout the rest of the circuit.

Alexa Anthony showed her horse Vogue, owned by Potcreek Meadow Farm, in the Equitation 14-15 division throughout the circuit and ended up tied for reserve champion at the conclusion of the series. Anthony and Vogue won the championship honors during week six and seven and placed very well in the equitation classes throughout the other weeks of competition.

Drossana, owned by John Huggins was reserve champion of the High Junior Jumpers for the Thermal circuit standings. Junior rider Navona Gallegos out of Karen Healey Stables showed Drossana during the eight weeks of competition for the mare’s circuit win. Gallegos and Drossana did well throughout the series, and were champion of the High Junior Jumper division during weeks two and six.

Karen Healey Stables is now competing at the Blenheim Spring Tournament on March 25 through 29 in San Juan Capistrano, CA.