At the Pima County Fairgrounds this past week, riders from Karen Healey Stables had great success. The Sundance Welcome Horse Show ran from Feb. 6-10, 2008, and riders Tammy Chipko and Carol Bird took home championships and top ribbons in the hunters and jumpers.

Tammy Chipko of Westlake Village, CA, was unbeatable in the Amateur-Owner Over 35 Hunters. She and All That, an 8-year-old Holsteiner by Accorado, were champions in the division after they won three out of five classes. 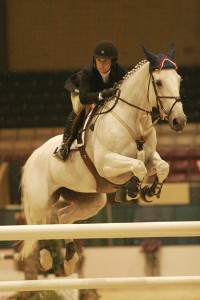 “He was fantastic,” Chipko said of All That, a horse she has owned for three years. “He’s the best horse I have. He’s the exact same every single day. He’s just a pleasure- there’s no lunging, no preparation. He just comes out and is a complete show horse.”

Chipko originally purchased All That, or “Oliver” as he’s known in the barn, as a jumper prospect. “He was a little over-impressed when he was five, so we made him an equitation horse. He did the equitation stuff and was extremely successful at that,” she recalled. “Just for sport one day I decided to do him in the four-foot Regular Working Hunters, and he was so fabulous that I decided to keep him as a hunter.” All That’s success as a hunter includes last year’s reserve championship at the Washington International Horse Show.

In addition to All That, Chipko competed with Gracie and Amnesty in the same division. Gracie picked up second, third, sixth, seventh, and eighth place ribbons, while Amnesty finished third in three classes.

On her amateur jumper Lottie, an 11-year-old Irish mare, Chipko finished second in the High Junior/Amateur-Owner Jumper class and in the classic. On her 11-year-old Holsteiner gelding Lucky Star 58, Chipko was sixth in the $5,000 Welcome Stake and 11th in the $25,000 Grand Prix. She has owned Lucky Star 58 for a year and a half and hopes to keep competing in the grand prix classes with him. “It’s been a year and a half now, and I think we’ve got it. Hopefully I’ve figured out how to ride him. He’s very big for me and very powerful, but we’ve come to meet in the middle,” she explained.

Chipko has trained with Karen Healey for seven years and said it was “the best thing (she) ever did.” She added, “She has been not only been an incredible trainer for me, she’s been an incredible friend. She’s gone above and beyond for me since I’ve known her.”

Fellow amateur rider Carol Bird was very successful in the jumper ring as well. With help from trainer Santiago Rickard, Bird piloted Mambo to two second place ribbons in the Low Junior/Amateur-Owner Jumpers and was second in the classic. On W.C. Swing, Bird was first in the Modified Junior/Amateur-Owner Jumpers and reserve champion in the division. They also finished first in the classic.