Karen Healey Stables competed at the Oaks Blenheim Fall Tournament this past week and came up with huge wins in the equitation and jumpers. Shelby Wakeman of Westlake Village, CA, won the ASPCA Maclay Region 8 qualifier, and Karen Healey riders won three jumper classics at the competition.

Healey stated, “We had a heck of a horse show. The regionals went beautifully. The jumpers couldn’t have been better. I generally put all of my focus at that horse show on the Maclay Regionals and so having them win in the jumpers on Sunday was icing on the cake.”

Wakeman, 17, rode San Francisco to the win in the ASPCA Maclay Region 8 qualifier. After a fall in last year’s qualifier, Wakeman was nervous for this year, but determined to improve her performance. She sat in second place after the jumping phase and moved up to first after the flat phase. There was no test given in the class.

Wakeman rode San Francisco to the win this year and plans on riding him in the ASPCA Maclay National Championship in Syracuse this November. “My horse was amazing and everything just worked out beautifully. I don’t really know how to explain it. When I walked into the ring, I just relaxed and everything came naturally,” Wakeman recalled. Having been in school at New York University, Wakeman came into the regionals without having ridden for a month, but as the weekend progressed she felt more confident. 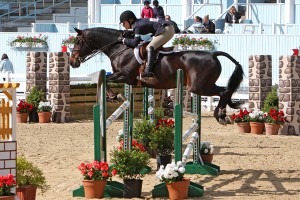 As far as her plans for this fall, Wakeman wants to be consistent and ride to top ribbons in the three equitation finals.

The winner of the $1,500 Modified Junior/Amateur Jumper Classic was Alex Book on Kool Shoes, who were the fastest out of 39 entries in the class. Carol Bird and Mambo led the victory gallop in the $2,000 Low Junior/Amateur Jumper Classic, and she finished third with W.C. Swing. Jocelyn Neff and Golden Flip finished seventh in the classic and were second in a Low division class. Lauren Kay and Damiro 7 were tenth.

Samantha Harrison of La Canada, CA, rode Santika to first place in the $5,000 High Junior/Amateur Jumper Classic over 27 other entries. At the previous week’s show, Harrison and Santika took the blue ribbon in the $10,000 Seahorse Open Jumper Classic. Also in the High Classic were Navona Gallegos and Acrobat, who finished sixth. Tammy Chipko on Limerick took third place in the High division class. Juliana Ball rode Sjapoo to a second place finish in the Children’s Jumpers and a win in the Modified Junior/Amateur Jumper division.

Karen Healey Stables will compete next at the L.A. International Horse Show on September 17-21. They then make the trip East to compete at the Capital Challenge Horse Show, starting September 27, in Upper Marlboro, MD.