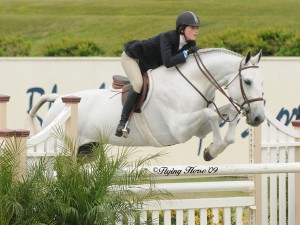 Karen Healey Stables showed at the Oaks Blenheim Spring Classic III this past week on April 7-12, 2009. Many of the riders did well this week including 16-year-old Jocelyn Neff of Newport Beach, CA, who won the $10,000 ASG Software Solutions/USHJA International Hunter Derby with her horse Allegro.

“It was very exciting,” Neff said of her win. “It was really nice because it was my horse’s first show back after nine months off and it was like his debut.”

Neff has owned Allegro for a year and a half and has only ridden the Westphalian gelding for about three of those months after an injury put him on the sidelines for most of the past year. It was great for the young rider to have her horse come back and do so well.

The Hunter Derby course that Neff and Allegro won over had a very unique element that involved the horses and riders jumping out of the ring. “When I first walked the course I thought it was insane to jump out of the ring, but then we practiced jumping in and out of the warm up ring, and I just pointed my horse at the fence and he jumped right over it,” Neff recalled. “I jumped from dirt to grass back and forth and went straight to a four-foot oxer and he didn’t even care, so I went into the ring feeling really confident.”

“It was so much fun and he was really, really brave,” Neff continued. “He is really comfortable and he is a beautiful mover, which made him really nice in the Hunter Derby. He is really easy to ride, he jumps really well, and he is really eager to please. He wants to do anything I ask him to do, and he is very intelligent. You look in his eye and he understands what I’m thinking, and he just trusts me to lead him through the course safely.”

Neff has been training with Karen Healey for a year and a half and praised the trainer for helping her prepare Allegro before the Hunter Derby class. “She does a great job training my horses. She got on Silver that morning before the class and he was so soft and so ready to go, which makes me feel more confident when I am riding him,” Neff acknowledged. “Karen is really honest. She won’t sugarcoat anything; she will always tell you what you did and why it happened, and I really like that. She gets right to the point, and it makes it easier to fix things.”

There was a $35,000 Grand Prix that two of Karen Healey’s riders competed in this week. Kasey Ament rode Siendefie in the grand prix and placed fourth and Samantha Harrison and Santika made their grand prix debut and placed tenth.

Hunter Derby winner Jocelyn Neff showed in the jumper and equitation divisions this week as well. Neff competed in the $5,000 Open Jumper Classic with Blue Shot Baco and place fourth. Neff also competed in the USEF Show Jumping Talent Search and placed fourth, the CPHA Junior/Amateur Medal and placed second, and was fifth overall in the WIHS Equitation Classic.

Alex Block showed both All That and Walk the Line in the Large Junior Hunter 16-17 division. Riding All That, Block placed second, third, fourth, and sixth in the division’s classes and with Walk the Line she was third, fourth, fifth and sixth. Hannah Bibb also showed in the Large Junior Hunter 16-17 division this week with Regatton, and placed second, fifth, sixth, and sixth.

Karen Healey Stables will compete next at the Showpark Spring Classic and Flintridge Children’s Horse Shows on April 23-26.